Pentagram was initially formed in 1971 by Bobby Liebling (vocals) and Geof O’Keefe (drums) with Vincent McAllister on guitar and Greg Mayne on bass. After recording several demos throughout the mid-70’s, this line-up lasted unti 1976. Much of the material that would be released decades later as “First Daze Here” was recorded by this original incarnation of the band.

Enter 1981. Joe Hasselvander, who joined the lineup in ’78, was dating a girl who had told him about her 18 yr old brother Victor back in TN. Victor Griffin was a young, heavy guitarist already recording his own music under the name of Death Row. On a family visit, Hasselvander traveled to Knoxville to see if this fresh-out-of-high-school musician lived up to his reputation. “Back then Victor Griffin and Lee Abney, his bass player at the time, were already playing the Death Row material,” remembers Hasselvander. “Griffin had the songs and I was blown away by his playing. He had a sound that was a lot deeper than what Venom was doing and it was heavier and more Sabbath-y than what Witchfinder General was doing. In fact, I thought that it was better than Sabbath. He was Blue Cheer mixed with Black Sabbath!”

Shortly before this period, while in high school, is where Griffin perfected the sound invention of “Drop B tuning.”Of the technique, Griffin says, “I had been messing around with a drop D tuning which was also uncommon at the time. I had been playing around with it and dropping it lower and discovered something when I got to B. If you play a fifth chord on the top two strings, it makes this octave. Now you have those seven-string guitars with the low B right on there. For the time though, I don’t know of anyone who had done that.” Little did he know at the time that he’d influence thousands of players in the future. 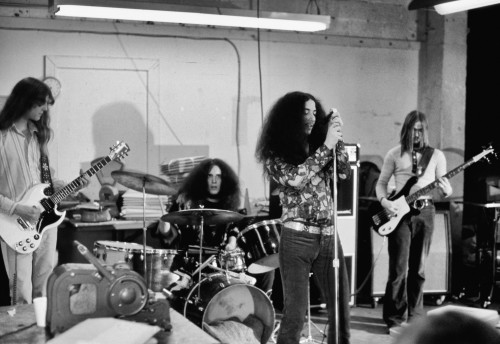 The guys played as many headlining gigs in the area as they could and opened for nearly every major label metal band who toured through the DC area. Crowning this era was an infamous gig at the defunct yet historic CBGBs in NYC. As a result of these performances and unique, stellar songs, a new deal with international indie label Napalm was on the table. The second album, Day of Reckoning finally hit the streets in 1987.

The same demons still haunted Liebling and his band however. This coupled with virtually no label support the group was soon driven back into the grave. It wasn’t until 1994 when the band would come back together and record for Peaceville records. Hasselvander jumped back on board. He, Liebling, Griffin and Swaney dug down deep into the vaults and pulled out a few old Liebling classics as well as the usual heavies Griffin had become known for. Be Forewarned came out to more fanfare than ever, even though that still kept them well beneath the mainstream. 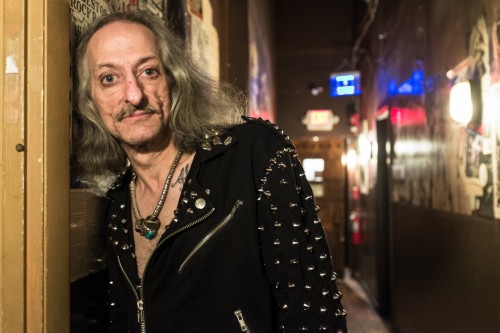 Fast forward to 1998…Hasselvander had rejoined the band and in 2001 PENTAGRAM released Sub-Basement and First Daze Here, a collection of Liebling’s best recorded 70′s songs. As quoted by Liebling, “This album finally gave me the growth steps I needed to take in order to find a wider audience.” More rock and hard rock than doom, the soulful songs reached across multiple sub-genres of metal and rock and roll. Accolades of these uncovered songs started pouring in from famous and infamous musicians alike as it went on to sell well over 10,000 copies. Covers would appear from respected contemporaries such as Hank III, Witchcraft and The Dead Weather. People such as Liam Gallagher from Oasis sited Liebling’s 1972 song, “Be Forewarned” in his top five songs of all time. Finally, was the genius of Bobby Liebling and PENTAGRAM becoming known by the mainstream?

Things never came easy for Liebling though. They say that it is at these times of deep darkness that the light ends up shining through the clouds brighter than ever. Liebling reached out to Griffin who at the time was fronting Death Row alongside Hasselvander and Swaney. Missing his old band mate and mentor, and seeing how hard he was trying to fly straight, Griffin agreed to a small run of US dates in the spring of 2010. The gigs were a welcomed success and peaked on the main stage of the Maryland Death Fest in front of hundreds of eager fans. The gig was stellar and captured on film by a five camera crew. This show and tour was such a hit that the band again started plodding another attempt at finally making it.

In the fall of 2010, a 3 album deal with the historic metal label, Metal Blade Records was announced!

“Curious Volumes ” was released in August 2015.

The creatures known as Mondo Drag hailed from deep along the banks of the wild Mississippi River where they created ominous, spiritual, savage psychedelic revival sounds. Summoned to the edge of the Earth, they journeyed west, collecting new sounds reminiscent of desert scapes, acid dreams, all-night prog vinyl spinning and a dark galaxy of protometal swirls, exalting the band unto new, wickedly brilliant horizons. Now settled in the deep realms of Oakland, the ensemble continues to create cosmically proportioned, churning jams evocative of a rainbow of obvious inspirations but also numinous new sounds emerging from the organ – heavy riffs.

If you love Blue Cheer, Black Sabbath, Can, Atomic Rooster, Hawkwind, Budgie, Uriah Heep, Deep Purple, Italian prog, Krautrock in general, and heavy space-outs….get into Mondo Drag. They’ll knock your socks off, let your hair down and take you on a mind’s eye exploration you won’t soon forget. Though they exude love for the spiraling tapestry of heavy psychedelia of the past, they are on a rock and roll mission all their own: an unearthed prog band, futuristic in their time capsule, rocketing forward through the depths, gathering the sounds of space itself.

In early 2015, after numerous line up changes and one member joining the highly acclaimed Blues Pills, Mondo Drag signed a 3 record contract with the hottest stoner/doom/retro label around: RidingEasy Records.

“The Occultation Of Light” is set to be released on February 26th internationally.

To characterize Buried at Sea as an overwhelming sonic experience would be a significant understatement. To reference the crushing tides of sound waves that wash over the listener as the foursome drone on in perpetual tectonic slow motion would be to understate again. To mention the hopeless situation in which one finds oneself beneath tons of doom, volume, aggression, and bleakness is simply stating the obvious.

Formed in Chicago in 2001, Buried at Sea quickly snared a viciously devoted cult following with honors, amongst the devotees, of being the loudest, the slowest, the doomiest, and the most crushing band on the planet.

Savanah is an austrian Stoner Rock Trio from Graz, formed in 2014. After their first show in june they played several concerts including supports for bands like Colour Haze, Karma to Burn, Rotor, Seven That Spells, Black Rainbows and Acid King. In February 2015 the first song of their upcoming debut EP Deep Shades was released and gained airplay on radio FM4, 3NRG and others.

The band takes influences from Doom, Desert and Psychedelic Rock to create their unique sound, once described as aggressive Stoner with a defeaning bass and powerful riffs. Energetic Live-Performances are part of the bands character and attitude.

Deep Shades is now available on their Bandcamp-Site as digital download or digipack and as a limited Vinyl Edition on StoneFree Records.