Formed in 2006, HORISONT have spent the last decade establishing themselves within the Scandinavian retro-rock revival scene, along with peers such as Witchcraft, Graveyard etc, thus creating a sound that takes the foundations of the movement while injecting hearty doses of boogie blues, infusing prog complexities and finishing it all off with that good ole NWOBHM swagger!

After releasing their fourth full length album entitled Odyssey in late 2015, HORISONT completed a 6 week tour across Europe with Kadavar along with their new label mates The Shrine, which helped gain further attention from their new label Century Media.

The band comments: “We are super excited to be signing with the mighty and highly acclaimed Century Media and look very much forward to be working together. Right now we are in the most creative era of this bands existence and this will spill right over into the new album we are currently working on. The first taster off the new stuff will hit the streets by the fall and we’re pretty sure it will electrocute your soul. In the meantime – see you on the road!”

Fast forward a couple months and HORISONT´s most refined work, their fifth full length album “About Time”, a tour de force of prog dynamics, psychedelia and twin lead assaults all led by a vocal performance of masterful proportions, is praised by rockers, headbangers and metalheads all over the globe.

Jens Prueter, head of A&R Century Media Europe, comments: “I first saw HORISONT at the Rock Hard Festival in 2013 where they turned the amphitheater into a sea of head banging and beer raising. Seeing them again last year, I was impressed how they took their retro influences and progressed into a league of their own. These guys are as tight as their trousers. Looking forward to join their journey! Thanks to all of the guys and the equally amazing Peter from Crusher Records who discovered them first and is still the captain of the ship!”

Swedish hard rockers Dead Lord were clearly born too late. Formed in 2012 in Stockholm, Sweden, members Hakim Krim (vocals/guitars), Olle Hedenström (guitars), Martin Nordin (bass) and Adam Lindmark (drums) are clearly more at home with 1976 (the year Thin Lizzy’s Jailbreak hit stores) than they are with 2017. As time machines don’t exist, however, the members are stuck in the present, where they decided to form the hardest working, hardest sounding rock band since The Hellacopters took off with Grande Rock at the turn of the millennium. With three albums to the wind—the band’s newest In Ignorance We Trust hits stores worldwide in late August—Dead Lord aren’t hoping you’ll join them, they’re demanding you join them. Riff by riff. Hook by hook. Just don’t call their brand of rock retro. 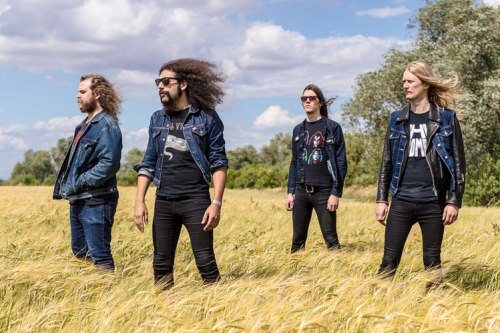 “It’s timeless, not retro,” Dead Lord’s Hakim Krim asserts. “Instead, it is pretty much all the modern rock bands that sound dated. I guess something happened during the ‘80s and onward. People had all sorts of recording tricks at hand, which led much music to sound very dated. Different effects and tricks are usually a lot of fun when they’re new, but tend to sound very dated after a decade or two. Not applying any of the modern mega compressors, expanders or other macky mack, make things sound more—I hate to use the word but here we go—true. More honest, I would say. Not retro. It just sounds more like the way it actually sounds live. The modern way of glazing everything in stupidity is not really what we’re after. Same way man buns are stupid, so is the modern rock sound.” 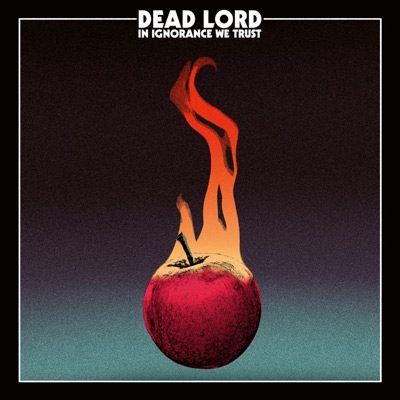 As with man buns and murses so too with ultra-slick studio tricks and obscenely-expensive mastering jobs. They’re just not in the cards for Dead Lord. The Swedes prefer to rock hard the honest way, where riffs hook, vocal lines stick, and steady rhythms pound the floor. There is no pretense in Dead Lord’s denim ‘n’ leather swagger. There are no parlor tricks to Dead Lord’s sound. Like Zeppelin, Metallica, and, of course, ABBA—all influences to the Swedes—the music does the talking. It’s raw, unbridled, and ready for action. No wonder Krim had little trouble describing Dead Lord’s sound.

Their new album, In Ignorance We Trust, naturally picks up where 2015’s lauded Heads Held High left off.

“We went a bit broader music-wise,” Krim reveals. “Part from some of our heaviest tunes, this album also has some of our softest and weirdest tunes so far. That’s what you do on the third album, right? [So, we] bring out the harmonica and jaw harp.”

Unlike Heads Held High, which was recorded locally in Sweden between David Castillo’s Studio Gröndahl and Nicke Andersson’s The Honk Palace, In Ignorance We Trust thrust the Swedes into the heart of Madrid, Spain, where they were enlodged for 10 days at Cuervo Recording Service. As a fully analog or digital studio, it’s pretty obvious which option Dead Lord and long-time producer Ola Ersfjord picked. They wanted the hiss of tape, the warmth of a manual edit, and all the hassle that comes with it.