1000mods is a psychedelic/heavy rock band from Chiliomodi, Greece. They were formed in the summer of 2006, and since then they have played over hundreds of live shows, sharing the stage with bands like The Black Keys, The Black Angels, Graveyard, Brant Bjork, Colour Haze and many more. They are known for their commitment to vintage equipment, thick and heavy analog sound and remarkably passionate stage performances.

In October 2010, the almighty Billy Anderson visited Greece in order to produce the band’s debut album, while Malleus Rock Art Lab took care of the artwork. “Super Van Vacation” was born. In order to promote their debut album, they played 40 shows in 15 countries around Europe, including festivals such as Rockwave festival, B’estfest and Lake on Fire.

After two successful European tours, the band was ready to get down to work again. Their experiences and growth paved the way for their upcoming album, “Vultures” which was released on the 30th of May 2014. Two European tours followed with a massive two-month tour on October/November 2014 and a tour supporting The Atomic Bitchwax during May 2015.

The time has come for 1000mods to get their effort to the next level. “Repeated exposure to…” was released on the 26th of September 2016, being their best album to date as well as an inspirational mixture of all that’s heavy in the glorious 70’s and the 90’s heavy rock movement. Having been recorded with hi-end outboard equipment in a non-stop 24/7 procedure, produced by both the band and sound engineer George Leodis and mastered by living legend Brad Boatright (the audio mastering engineer of Sleep’s “Dopesmoker”) “Repeated Exposure to…” sounds thick, beefy and tight, as a modern heavy rock album must sound.

Not much later, the band departed for a 27-date European Tour with Monkey3 and Moaning Cities, participating in leading festivals such as Up in Smoke Indoor Festival In Z7, Desertfest Belgium, Desertfest Athens and Keep it Low Festival. The Greece/Cyprus leg of the tour followed, playing in 12 different cities with their big gig in Athens in January 2017 being Sold Out with more than 2700 people attending!

Their 2017 “Repeated and Exposed to” tour features a total of 42 live dates in 15 European countries, including –once again- appearances in acknowledged European festivals such as Desertfest London, Desertfest Berlin, Under the Black Moon Festival in Munich and Riff Ritual Fest in Barcelona. The tour was a big success for the band with noumerous Sold Out shows accross Europe.

Things got started back in 2006 when four guys from Zagreb went to a rehearsal place to rock, down tuned their guitars, turned up the volume on their amps, unaware that they would soon become a band known as COJONES. By the end of 2007 Sonic Doom Records made its first release, a split album titled „Cojones & Umor split LP“. After the Mammoth March tour in 2008 Cojones started recording their first LP titled Sunrise which was released DIY again through Sonic Doom Records in 2009. These guys played numerous gigs throughout Europe where they shared the stage with many great bands and played at Stoned from the Underground festival 2012 in Erfurt.

BEND TO TRANSCEND and was finished and released completely DIY in the summer of 2012 as a vinyl only release and digital download, with all the merchandise surrounding the album handmade and printed by the band. With the album finished, the van full of equipment and a big box of merchandise, Cojones are once more ready to set sail on a fantastic voyage through the European deserts, mountains of the Alps, squat clubs, long nights, highway lane blues, vegan meals, smoke and no rearview mirrors, old and dear friends, kicker spielen, drinking beer, playing music every day and all that rock`n`roll madness.

So where are they now? Legend has it that if you listen real close (or just turn your Bandcamp player up a bit) you can still hear them playing some more…

Spotlights is the Brooklyn-based married couple of Mario and Sarah Quintero.

In Spotlights, the Quinteros summon a supreme sound, equally heavy and dreamy. A tar-pit sludge-rock foundation is blanketed by layers of shimmering shoegaze. Their debut full length TIDALS was released on Crowquill Records in the spring of 2016 as a follow up to the synth laden, doom-pop EP, Demonstration. Tidals’ songs rock hard and memorably, bringing to mind hints of bands, from Failure to My Bloody Valentine to Godflesh to Smashing Pumpkins and beyond.

Spotlights was handpicked by Deftones to support the band on three weeks of its summer U.S. tour in August of 2016. Select dates included support from 90’s post-hardcore, greats, Refused. They quickly followed up with a second national run in September with If These Trees Could Talk 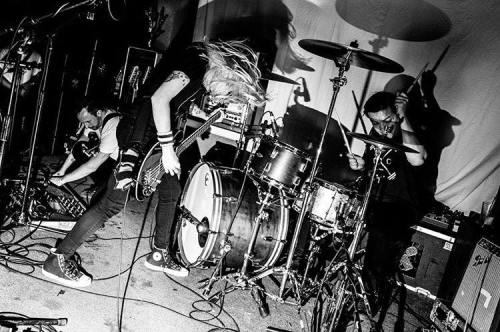 When it came time to record the the follow up full length to TIDALS, the Quinteros didn’t have to look far to find the perfect producer. “Choosing to work with Aaron [Harris of Isis] on our new record was a no brainer for us. We get along great and he completely understands where we are coming from musically and knows just how to capture that.” says Mario. Sarah adds “Plus, he’s an incredible drummer and we tricked him into playing on four of the songs!”. The three of them spent a week in Los Angeles at Palmquist Studios, putting together one of the most dynamic, and emotive collection of songs to date.