Those infamous sludge outlaws WEEDEATER are where true Southern rock and metal meet raw humour, old religion, as well as weed and whiskey. ‘Goliathan’ embodies the band’s trademark shuffle and swagger at their fullest. Syrupy slow riffs are buoyed by canyon-deep bass and some of the hardest-hitting drumming since Keith Moon. Full-on bruisers such as “Cain Enabler”, “Claw of the Sloth”, and the aptly-named “Bully” demonstrate that their latest album ‘Goliathan’ is delivering a vintage WEEDEATER and the soon-to-be gold standard of Southern sludge metal.

At its founding, the band rose like a doobie phoenix out of the ashes of BUZZOV•EN. When the cult sludge act called it a day, bass player Dave “Dixie” Collins teamed up with guitarist Dave “Shep” Shepherd and founded WEEDEATER in the harbor town of Wilmington about the year 1998. Their crushing and massive first full-length ‘…and Justice for Y’all’ (2001) created an immediate buzz, while critics were struggling to put a tag on their sound.

Nearly everybody agreed that stoner rock, doom, sludge and some crusty elements were part of the mix, which the band simply calls “weed metal”.
“Goliathan” was released in 2015 on Seasons Of Mist Records. 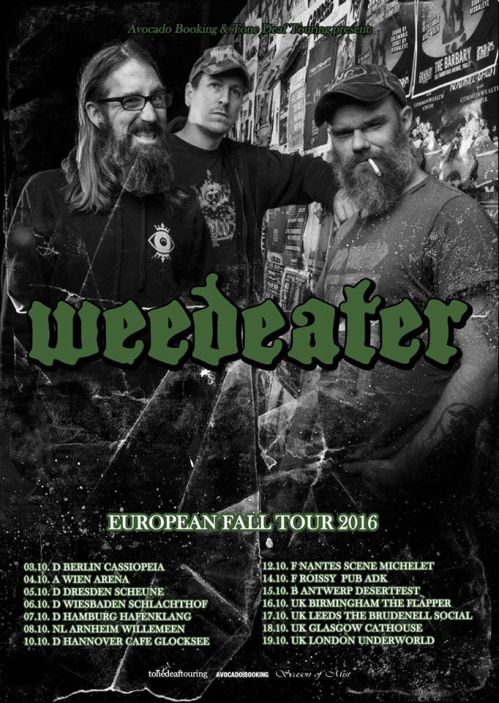