Pentagram was initially formed in 1971 by Bobby Liebling (vocals) and Geof O’Keefe (drums) with Vincent McAllister on guitar and Greg Mayne on bass. After recording several demos throughout the mid-70’s, this line-up lasted unti 1976. Much of the material that would be released decades later as “First Daze Here” was recorded by this original incarnation of the band. 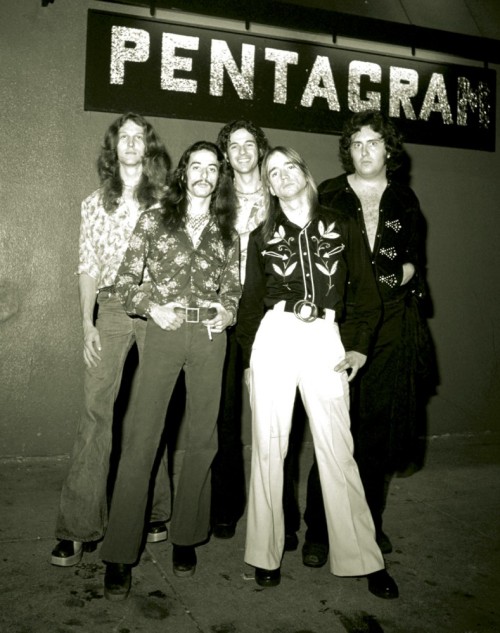 Enter 1981. Joe Hasselvander, who joined the lineup in ’78, was dating a girl who had told him about her 18 yr old brother Victor back in TN. Victor Griffin was a young, heavy guitarist already recording his own music under the name of Death Row. On a family visit, Hasselvander traveled to Knoxville to see if this fresh-out-of-high-school musician lived up to his reputation. “Back then Victor Griffin and Lee Abney, his bass player at the time, were already playing the Death Row material,” remembers Hasselvander. “Griffin had the songs and I was blown away by his playing. He had a sound that was a lot deeper than what Venom was doing and it was heavier and more Sabbath-y than what Witchfinder General was doing. In fact, I thought that it was better than Sabbath. He was Blue Cheer mixed with Black Sabbath!”

Shortly before this period, while in high school, is where Griffin perfected the sound invention of “Drop B tuning.”Of the technique, Griffin says, “I had been messing around with a drop D tuning which was also uncommon at the time. I had been playing around with it and dropping it lower and discovered something when I got to B. If you play a fifth chord on the top two strings, it makes this octave. Now you have those seven-string guitars with the low B right on there. For the time though, I don’t know of anyone who had done that.” Little did he know at the time that he’d influence thousands of players in the future.

The band would coincidentally get signed to an unrelated label entitled PENTAGRAM Records in 1985. Death Row recorded a demo in 1981, which was paid for by Hasselvander. The following year, Liebling would pay for another. Three years later, these two demos would be put together to form the self-titled PENTAGRAM album. Merely days before the deal with the label was inked, Liebling had convinced Griffin that PENTAGRAM was a better moniker since it was already well known in the area. Fifteen years into his career Bobby Liebling and PENTAGRAM would finally release their debut album; a record which nineteen years later would be inducted into Decibel Magazine’s “Hall of Fame!” Sadly, Hasselvander was once again unhappy and restless. Before the debut’s release and just after the second record was finished being recorded, he again parted ways and joined N.W.O.B.H.M. / pre-thrash luminaries, Raven. Stuart Rose soon joined Liebling, Griffin and Swaney as the band continued down its path to the top. The guys played as many headlining gigs in the area as they could and opened for nearly every major label metal band who toured through the DC area. Crowning this era was an infamous gig at the defunct yet historic CBGBs in NYC. As a result of these performances and unique, stellar songs, a new deal with international indie label Napalm was on the table. The second album, Day of Reckoning finally hit the streets in 1987.

The same demons still haunted Liebling and his band however. This coupled with virtually no label support the group was soon driven back into the grave. It wasn’t until 1994 when the band would come back together and record for Peaceville records. Hasselvander jumped back on board. He, Liebling, Griffin and Swaney dug down deep into the vaults and pulled out a few old Liebling classics as well as the usual heavies Griffin had become known for. Be Forewarned came out to more fanfare than ever, even though that still kept them well beneath the mainstream.

What PENTAGRAM started to realize, however, is that they had influenced a handful of heavy bands who, like them, sacrificed speed for weight of the riff. Doom metal was in full swing with every one of its bands, Trouble, Candlemass, Cathedral, and so on, sighting PENTAGRAM, along with Black Sabbath, as their main influences. At this time, Peaceville also obtained the rights to the band’s first two albums and rereleased them to young doomsters hungry for the original recipe. It seemed that finally, PENTAGRAM would get its due. Regrouped and re-charged these D.C. doom godfathers gave it another go. Unfortunately, once again, Hasselvander was once again fed-up with the madness and returned solely to Raven. Swaney soon too would become disheartened with the lack of tours, label support and usual rigors of a band living the “rock n roll lifestyle.” He also soon departed the band for a second time. Despite all this, Liebling and Griffin forged ahead and recruited local drummer Gary Isom and Griffin’s nephew, Greg Turley on bass. Stardom was still far, far away however and within a few short years, PENTAGRAM and mainman Liebling once again tittered over an open grave.

Fast forward to 1998…Hasselvander had rejoined the band and in 2001 PENTAGRAM released Sub-Basement and First Daze Here, a collection of Liebling’s best recorded 70′s songs. As quoted by Liebling, “This album finally gave me the growth steps I needed to take in order to find a wider audience.” More rock and hard rock than doom, the soulful songs reached across multiple sub-genres of metal and rock and roll. Accolades of these uncovered songs started pouring in from famous and infamous musicians alike as it went on to sell well over 10,000 copies. Covers would appear from respected contemporaries such as Hank III, Witchcraft and The Dead Weather. People such as Liam Gallagher from Oasis sited Liebling’s 1972 song, “Be Forewarned” in his top five songs of all time. Finally, was the genius of Bobby Liebling and PENTAGRAM becoming known by the mainstream? Empowered by the recent accolades, Liebling put together a few different line-ups in hopes of playing out live again. Unfortunately, this was not to be the case. Several, now infamous, false starts went down.

Another four years would go by as Liebling struggled against his demons. In his heart, he still wanted to create music. Encouraged by his friends and management, he got a band together again in early 2009. Focused and determined, once again the man was ready to show ‘em how! Gary Isom (Spirit Caravan) joined back up on drums; Mark Ammen (Unorthodox) handled the bass while Liebling’s self-described “secret weapon,” Russ Strahan, burned bright on guitar. A triumphant come back show was booked at the historic Webster Hall in NYC. It sold out as people traveled from around the world to show support. Highlighting songs from PENTAGRAM‘s career, the gig went down in a blaze of glory. 914 Pictures was there capturing all the glory of the madman back at the mic in this historic setting. The performance proved why this band was worthy of mentioning in between Black Sabbath and Judas Priest as innovators of heavy metal. 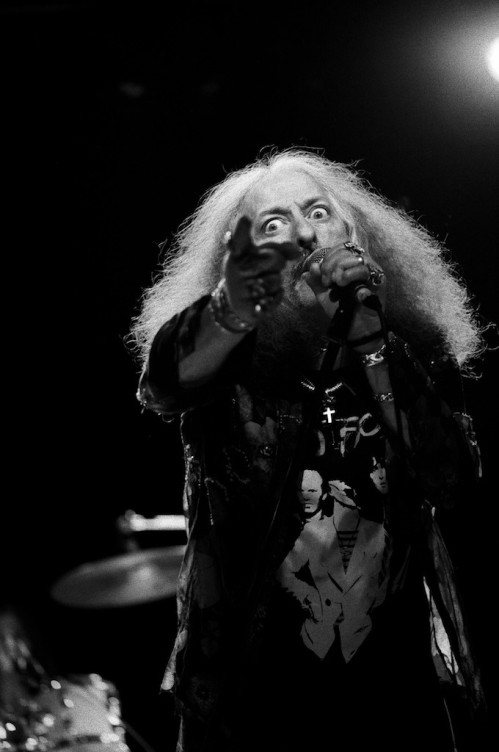 Things never came easy for Liebling though. They say that it is at these times of deep darkness that the light ends up shining through the clouds brighter than ever. Liebling reached out to Griffin who at the time was fronting Death Row alongside Hasselvander and Swaney. Missing his old band mate and mentor, and seeing how hard he was trying to fly straight, Griffin agreed to a small run of US dates in the spring of 2010. The gigs were a welcomed success and peaked on the main stage of the Maryland Death Fest in front of hundreds of eager fans. The gig was stellar and captured on film by a five camera crew. This show and tour was such a hit that the band again started plodding another attempt at finally making it. 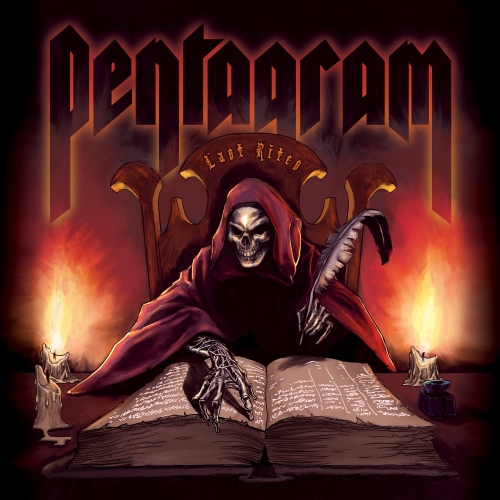 In the fall of 2010, a 3 album deal with the historic metal label, Metal Blade Records was announced! Last Rites, the album Liebling had been dreaming of for ages was announced…

The Order Of Israfel are rooted in Doom, but they shouldn’t be reduced to the pure slow-motion sound, because “Wisdom” is clearly too complex. “Wisdom” is a record of big gestures and stories and is full of epic beauty and magic. This is not music to be consumed just casually, but a widescreen sound with invitation to dive into tempting and dangerous world. 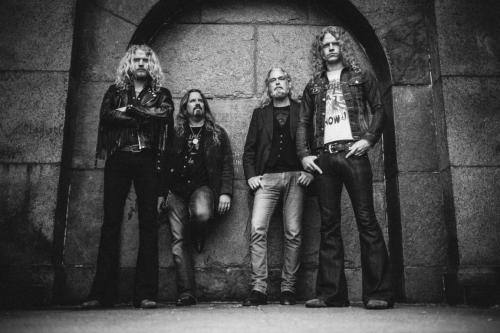 Doom, Hard Rock, Metal, Folk – The Order Of Israfel play with many elements and form a compact unit out of it, with songs to never get boring. A mystical and mysterious album with highly addictive potential.

Meth Drinker from New Zealand play crushing sludge in the vein of Noothgrush, Grief, Iron Monkey.
Easily the most gritty and pissed off sounding sludge bands of recent times! 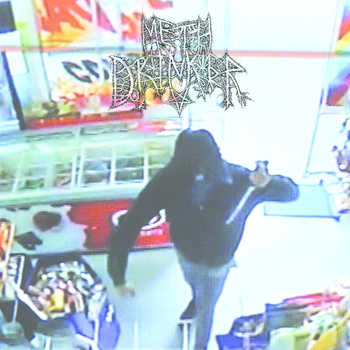 Weak is the most recent breed on the raw birth records label.
Downtempo hardcore with an intent of delivering maximum energetic anger and despair. Think Dystopia meets Crowbar!