Formed by T-Roy in 1993, Sourvein have released four full length albums as well as a trilogy of EPs and various split recordings with the likes of Buzzov*en, Bongzilla, Rabies Caste, Negative Reaction, Grief, Subsanity and Church Of Misery. The band also contributed to the Eyehategod tribute record, For The Sick with a cover of “Broken Down But Not Locked Up.”

Said popular online metal portal Metal Review in an early review of the latest record: “They are THE hot doom ticket and deliver on every level… another absolute doom masterpiece from Cape Fear’s best.”

Music Emissions agreed crowning Sourvein “…one of the best American doom bands.” while Terrorizer Magazine called them “one of the heavest bands to ever walk the earth”.

Graves at Sea was formed in 2002 by friends Nick Phit and Nathan Misterek, with then members Roger Williams & Steve Klatz (RIP). After self-releasing the demo titled Documents of Grief, they toured extensively and were quickly noticed by Greg Anderson of Southern Lord/Sunn, who released their 7″ Cirrohosis/Atavist Arise in 2004. Later in 2005 the band released a split with friends Asunder on Life is Abuse (cd) and 20 Buck Spin (vinyl).

In 2007 Graves at Sea went through a line up change when Nathan moved to Oakland and Nick moved to Portland, OR. After playing two final shows with Chiyo Nukaga (Noothgrush) on drums and Miguel Veliz (ex-Sourvein, The Roller) on bass, the band broke up in 2008. 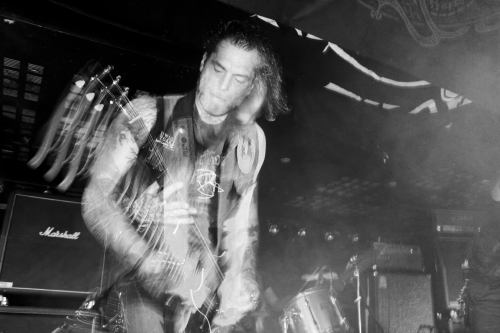 In 2012, however, they decided to reunite with Chiyo on drums and Greg Wilkinson (Brainoil) on bass, but due to touring restraints, Chiyo and Greg decided to step down.

The current line up is Nick Phit (guitar), Nathan Misterek (vocals), Bryan Sours (drums, ex-Subarachnoid Space) and Jeff Mcgarity (bass, ex-Preta) making Graves at Sea once again a touring and recording band. In 2013 they recorded a split with Loss and a split with Sourvein, all with new material and have numerous tours planned far in to 2014.