The shifting movement of red hot sand, spiralling around the withered trunk of a gnarled tree are among the hypnotic visions Kylesa evoke with “Spiral Shadow”. Drawing deeply from the roots nourishing their unique sound with the essence of crust punk, psychedelic and stoner rock as well as sludge metal, the US-band is tapping into an even deeper musical universe than ever before. It all begins in Savannah, Georgia, where guitarist and singer Philipp Cope founds Kylesa together with Brian Duke on bass and drummer Christian Depken of his former Sluge Metal act Damad during the year 2001. They are joined by singer and guitarist Laura Pleasants.

Throughout the past decade Kylesa became a band able to combine avant-garde experimentalism with relentlessly sludgy riffs, drop-tuned guitars and heavy hazed psychedelia.

„Ten years into an unbroken wave of revitalized and omnivorous metal bands, it feels almost ridiculous to have to keep saying this, but: If you’re not paying at least some attention to this stuff, you’re screwing up. Like many of the best “extreme” metal albums in 2010, Spiral Shadow is less about alienating outsiders through heaviness, volume, or violence than it is about blurring those extremes (hook and noise, dreamy and ragged, virtuosity and bluntness, metal and pop) on the same record, on the same songs.“
-Pitchfork

In 2004, Savannah based experimental post-hardcore group Circle Takes the Square turned the scene on its ear with the release of their critically heralded, ferocious debut full-length, As the Roots Undo; Seven years later, the band has made their long-awaited return to the studio to record their highly anticipated follow-up, Decompositions Volume 1, which they will self-release this fall on their newly formed label Gatepost Recordings.

Winnepeg’s Ken Mode blends the dirt and filth of 90s noise rock with the frenetic, hyperactive characteristics of modern metal and hardcore. 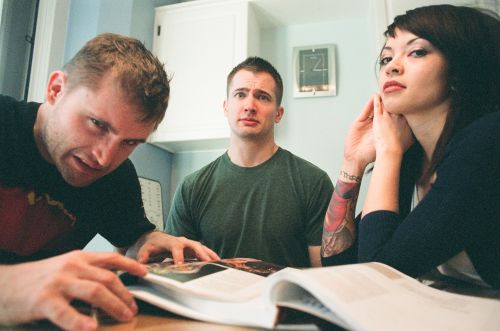 “There are drummers and there are drummers. Then, there are drummers. Ken Mode’s skin basher Shane Matthewson belongs to the latter kind; the ones that organize and gather the masses. The ones that make the difference and are, through skills and gusto, able to elevate the sound of a band from the above par to the outstanding. And kudos to the band too. Quite frankly I wasn’t expecting a three piece to come off as potent as Ken Mode. Guitarist vocalist Jesse Matthewson (is this one musical family or what?) bends his axe in quasi mathematical manners, the riffs are played in Forrest Gump ping-pong speed angularity, shooting off in all directions and…the result is an explosive encounter between post hardcore and noise rock. ” – Deaf Sparrow Zine