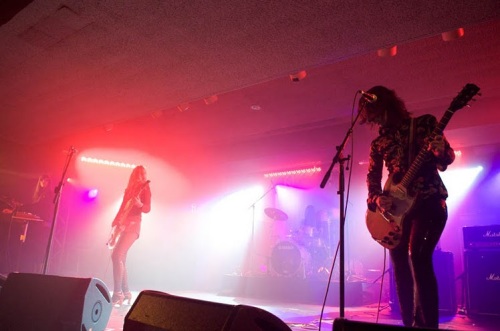 Musically, H-p1, White Hills second full-length for Thrill Jockey, expands on the explorations of previous albums in ambience, noise, and space rock all led by guitarist Dave W.’s blistering guitar solos. This is the most fully realized White Hills album to date and the one that takes them furthest from their pure space rock roots. It is also their most angry record. It is a reaction to what White Hills sees as government co-opted and controlled by corporations. It is a wake up call:

We can barely pay our rent each month but we are willing to pull out our credit cards and go into debt each time a new iPhone promises a better connection. The joke is on us. Our greater connectivity has caused us to disconnect from our humanity. We have been sold the religion of consumerism to feed the corporate machine. We have been tricked into believing that wanting our tax dollars to pay for our own health care is treacherous to the ideals of a democratic society. H-p1 is symbolic of the simplification of complex ideas to keep the masses from questioning the system. – Ego Sensation

The cover is a stark, colorless landscape, a metaphor for the status quo, while the inside and the record are an attempt to break free from this bland existence. The music and the photo inside are loud, colorful, exuberant, and alive.

H-p1 was recorded at the Ocropolis in Williamsburg, Brooklyn on September 7th & 8th 2010 by Shahin “Showtime” Motia (guitarist of Oneida) and mixed by Dave W. & Pierre Auntour in NYC and by Antronhy in Nottingham, UK. The album was mastered by Heba Kadry at the Lodge. A notable difference is the addition of synthesizer player, Shazzula, for the recordings. Shazzula has performed with the group in Europe on and off throughout the last year. There was no compression used on the record. Instead distortion boxes were used to enhance the natural dynamics of the songs. “The recordings captured a natural ebb and flow of the instruments within each song. For this reason I did not ride the faders while mixing the record to bring out certain instruments over others. It is the way it happened when it was recorded.” said Dave W.

H-p1 is the cry for the disenfranchised, the exposure of the ills that the corporate-controlled governmental system has put in place. This seventeen minute song is the summation of the album, the point when the protagonist delivers his realization and vision of a solution to the masses. There is another way. You don’t have to be a drone. 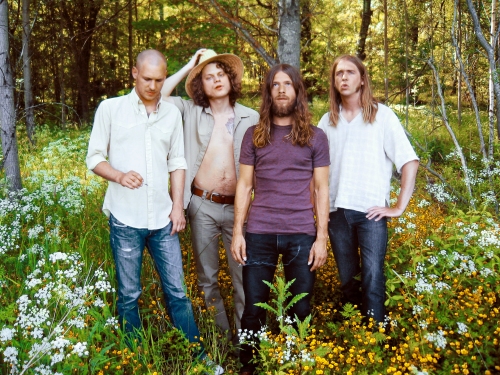 It all started as an experiment in 2003. Four musicians from Örebro, Sweden decided to pool their talents and it didn’t take long before a new band was formed. Soon after, the moniker Dead Man was chosen and the band sprung to life. With each member possessing a wealth of musical experience derived from time spent in various Swedish acts (including the hard rock band NORRSKEN, which featured in its ranks current WITCHCRAFT front man Magnus Pelander, GRAVEYARD members Joakim Nilsson and bassist Rikard Edlund and DEAD MAN’s Kristoffer Sjödahl), the band put their psychedelic, folk and hard rock influences into a pot and began to stir. Within a few weeks of forming, the quartet’s intense songwriting chemistry generated a solid set of hard-hitting, memorable songs.
A 7-inch and two full length records later they earned ecstatic reviews and a reputation as an undeniable live act.